Transhumanism – the end of the human being?

Transhumanism and the controversial and highly topical questions it raises was the subject of a conference in Switzerland. Mathias Maurer from the journal Erziehungskunst reports.

DORNACH (NNA) – An unusual conference took place at the Goetheanum in Dornach, Switzerland, from 7-9 September: a cultural conference on the subject of the transhumanist vision of the future. Unusual not just because of the location where it was held, but also because speakers spoke about this highly relevant subject whose fields of work could not be more different.

Fuelled with billions from foundations, we are striding in huge steps towards the artificial human being. The year 2045 is the date when it is meant to happen that human being and machine become one, mortality has been conquered and human self-determination has been handed over to the external control of algorithms.

Yet the whole thing starts so innocuously with each person themselves – and everyone does it: physical, mental and spiritual self-optimisation. The development of such enhancement, as it is called, is on an exponential trajectory. We want to be beautiful and healthy and do all kinds of things, egged on by the advertising industry, to skip pain-free and youthful into old age. This relates not just to breast enlargement, dental implants and cardiac pacemakers but in vitro fertilisation, prenatal screening, prosthetics and setting up organ banks with the aim of being able to replace suboptimal body parts as required.

And our intervention does not stop there: if we become depressed, psychotropic drugs, neurotransmitters and the administration of hormones recalibrate us; if we are not clever enough, we “learn” via neuro-links and interfaces by feeding our brain with knowledge about the world and “feelings”, all “individualised” by our digital profile. In the end the living human becomes superfluous, their humanity mechanised.

This is not some nightmare scenario but has meanwhile become political reality: “Sophia” the robot has been given Saudi Arabian citizenship and could thus become a political leader. And who knows that a transhumanist party in Poland received 15 percent of the votes at the last election?

Transhumanism is not some utopia born in the brain of a technocrat but practical research which is ethically highly explosive and driven by the biggest computer and software companies in the world – such as Google-Alphabet Inc. for example: the longing for eternal life and god-like omnipotence is, not least, a lucrative business model.

At the conference, the arc of the subject matter was stretched almost to maximum without prematurely being tied into a pigeonholing anthroposophical nomenclature. The presence of the artists and scientists with their individual “works” starkly outlined the reality of the situation both to the participants and speakers: on the one side was the human being drawing their relationship with the world out of their inner self and expressing it in an individualised way. And on the other side was the external human being who (voluntarily) subjects themselves to outside determination, gives up their autonomy and allows standardised sensory, perceptual, thought and behavioural patterns to be impressed on them.

The conference was organised by the Section for the Literary Arts and Humanities at the Goetheanum, moderated by Christiane Haid and Ariane Eichenberg. The various dimensions of its highly topical subject matter were highlighted by the list of speakers: Roland Benedikter, politics professor in Bolzano with outstanding contacts to the transhumanist think tanks; Michael Hauskeller, philosophy professor at Liverpool University undertaking research on the moral foundations of enhancement; Christian Kreiß, economics professor at Aalen University championing an economy on a human scale; Yaroslava Black-Terletzka, priest of the Christian Community studying the subject of origin myths; René Madeleyn, senior doctor at the Filderklinik on the subject of in vitro fertilisation; finally, the well-known and very different writers Galsan Tschinag, shaman and tribal chief from Mongolia, Patrick Roth (Sunrise), and Sibylle Lewitscharoff (Das Pfingstwunder) who read from their works and spoke about them.

What does being human mean?

Technical developments present us with the challenge of developing an awareness of what human, self-determined action on the basis of our own perception and power of judgement means to us. Do human beings have “free” will? Is there an ineluctable, non-replicable human I? What is the difference between a self-learning digital cyborg and a human being who is capable of real existential encounters – questions which will be pursued in a follow-up conference next year. A book is in preparation.

Galsan Tschinag stands alone on the stage of the large auditorium in the Goetheanum. He turns slowly in a circle and calls on the gods. His melodic singing, his voice appears to sound not from his mouth but out of a soaring and resounding resonance space – an event that is deeply moving for the listener. Where was the I of this shaman? Concentrated within himself and spread out into the cosmos at the same time.

This report was first published in the journal Erziehungskunst. 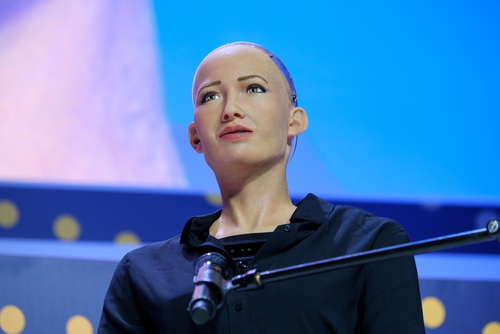