In its hundredth anniversary year, the Waldorf education movement in events held at the Leipzig Book Fair focused on the way it has developed internationally and on the future.

LEIPZIG/HAMBURG/STUTTGART (NNA) – The international Waldorf movement was the focus of events held at the Leipzig Book Fair celebrating the hundredth anniversary of Waldorf education. But rather than looking back, the anniversary was used as an opportunity to look forward and involve itself in contemporary questions in education.

“We want to rediscover Waldorf education worldwide, deepen its foundations, relate it to contemporary events and look into the future,” said Henning Kullak-Ublick from the German Association of Waldorf Schools (BdFWS). In addition, the anniversary year was an important occasion to seek to deepen contacts both outside and within the worldwide Waldorf movement, Kullack-Ublick was quoted in a press release. The BdFWS board member was speaking at a festive event in the Mendelsohn House in Leipzig.

The way in which the movement has grown since the foundation of the mother school in Stutttgart-Uhlandshöhe in September 1919 into more than 1,000 Waldorf schools worldwide was described by the main speaker at the festive event, Nana Göbel, a member of the board of the international Waldorf organisation Friends of Waldorf Education. Her book covering the worldwide spread of the Waldorf school from its beginnings to the present day, Die Waldorfschule und ihre Menschen. Weltweit. Geschichte und Geschichten 1919 – 2019 (Verlag Freies Geistesleben, Stuttgart 2019, ISBN 978-3-7725-7919-6), was published in time for the Leipzig Book Fair.

It became clear from her remarks that “certain signatures” keep repeating themselves througholut the history of the schools. A preparatory period was always required before a point was reached, as happened in 1919, when “courageous people at a particular moment in history take the initiative to found a school”. These were always the parents who wanted a different form of education for their children. Then there were the officials from the authorities who enabled the school to come about through granting it approval. The search for suitable teachers as well as the question as to the financial basis for the new school also ran, in the words of Göbel, like a common thread through the history of the school movement in all parts of the world.

Here Göbel differentiated between different phases in the spread of the Waldorf schools. In the years to 1938, the idea of the Waldorf school spread from Stuttgart to Switzerland, Norway, Britain and North America. This happened against the background of the movement for reform of the school system, the New Education Movement, and the search for a new type of education. “The concern at the time was to help children to become themselves,” the press release quoted Göbel as saying.

During this time the idea of Waldorf education also spread to northern and eastern Europe. Furthermore, groups of emigrants played a major role in its spread. “There were many Jewish Waldorf teachers who had to leave Germany with the rise of the Nazi regime.” In this way Waldorf education arrived in Latin America where in Buenos Aires the history of the Steiner School goes back to 1939.

A second phase of expansion then followed in the southern hemisphere in the 1960s when Waldorf education also established itself in Australia, New Zealand and South Africa. It had been taken there by supporters of the New Education Movement from the English-speaking countries of Europe.

A further signature in the spread of Waldorf education turned out to be the question how the curriculum as it was developed in Germany could be adapted to different cultural contexts. In the third phase of its expansion after 1989, the question arose again more urgently as Waldorf schools reached Israel, Tanzania, Kenya and Asia. “The pioneers who founded these schools were looking for content which was appropriate for their cultures,” Göbel explained.

A challenge also presented itself particularly in India, China and Thailand from the fact that other religions now also had to be integrated, moving beyond the basic Christian tenor of Waldorf education.

The development of the Waldorf schools was still a long way from peaking, Göbel emphasised. “The schools today have to respond to the demands of life,” she added. Worldwide this was the right to childhood as well as the right of children to play, something which had to be defended in school as well.

With her three-volume, 2000-page book, Göbel also intends to commemorate the committed people on all continents who as pioneers had helped Waldorf education spread all over the world. 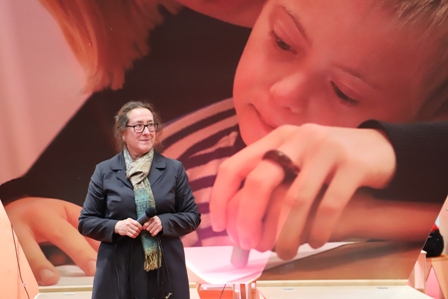 Nana Göbel presents her book on the history of the Waldorf schools worldwide at the Leipzig Book Fair.<br>Photo: Birgit Thiemann