The aid organisation Sea Watch with 40 other organisations has demanded the closure of the refugee camps on Lesbos before winter sets in. Otherwise more people will die, for which the EU should be held accountable.

LESBOS (NNA) – Closure of all refugee camps on the Greek island of Lesbos and other islands before winter sets in has been demanded by the maritime rescue organisation Sea Watch and 40 other solidarity groups and organisations working on the Greek islands. They fear that once again people will freeze to death.

Six people died in the Greek camps last winter, “their deaths linked to inhuman winter living conditions”, Sea Watch said. Both the authorities and the UN refugee agency UNHCR were failing to take action to prevent further deaths despite sounding the alarm over the situation.

With the approach of winter, the situation in the Aegean was worsening. In September alone 4,609 refugees had arrived on the Greek islands. Under the hashtag #opentheislands, the organisations are demanding that the refugees be given an adequate reception on the mainland outside refugee camps.

“People who are seeking our protection from war and persecution urgently need more attention than a cardboard box and a blanket. That cannot be asking too much. We are seeing intolerable conditions here. The EU and the Greek government are responsible for every further death from cold,” Sea Watch operations manager Caroline Schröder summed up her experiences after a three-month observer mission in the Aegean.

The situation is particularly terrible in Moria camp on Lesbos. Sea Watch quotes a refugee, forced to stay there, speaking about the conditions: “Living in Moria makes us all sick. In the morning you wake up in a cramped tent or container between other people. It smells disgusting and I hate that I cannot even wash myself properly.

“In winter it is freezing. Everything is soaked. When you wake up you cannot move your limbs. And you’re covered in ashes. Last winter we burned paper and plastic to stay warm. It is as if we were not human beings.”

Moria is severely overcrowded, holding 5,000 people in a facility built for 2,300. The dramatic situation is described by the aid organisation in greater detail in the Sea Watch blog #MonitoringMoria.

The alliance of solidarity groups and organisations stresses that the current situation is not caused by the onset of winter or a sudden increase of arrivals. Rather, it was a direct result of the EU-Turkey agreement and EU asylum and migration policies of exclusion. These policies kept people trapped on the islands for prolonged periods of time, prevented people from ever reaching Europe, and stopped people who were eligible for relocation and family reunification from moving on to other countries in a reasonable time.

The appeal is therefore also addressed to the EU. All European governments were responsible for curtailing the rights of the refugees here. “The right to shelter and appropriate accommodation is a human right,” emphasised Caroline Schröder. The Greek government and EU could not escape accountability for every further death. 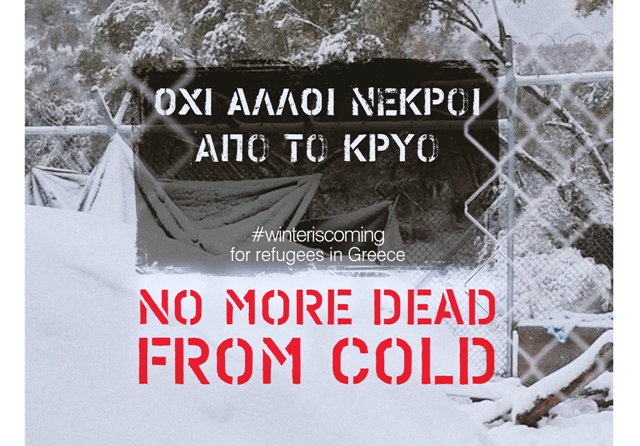