Between a dash and a hyphen. How a misplaced mark can cause a whole lot of trouble …

ESSAY | Keeping a soft border on the island of Ireland has been one of the most intractable issues in the Brexit process. Matthew Barton learned the hard way how easily old wounds can be opened up again.

LONDON (NNA) – Could a friendship come unhinged by an error between two forms of punctuation that may seem, though subtly different, at least not worlds apart?

Stroke City, in Ireland (north) – and more on the latter appellation in a moment – was first given the name not, as one might think, because of the health fall-out from the Troubles, though it might well deserve that meaning, but as a humorous or exasperated epithet from a local radio presenter, Gerry Anderson: a way of coupling two names for the same place in response to the warring sensitivities between the two communities in Doire or Derry or Derry-Londonderry.

Just choosing how to say the name of the place where they live all too easily marks out its inhabitants as coming from one side of the divide or the other, the “London” bit of it being anathema to those who see themselves as part of larger Ireland, and the lack of it a glaring omission to unionist sensitivities. Road signs in the area have often been vandalised, the “London” part being spray-painted over, or “London” added to signs for plain Derry. In 2007, apparently, a Canadian tourist trying to buy a bus ticket was told, to his confusion, that there was no such place as “Derry”.

Cue one naïve editor of a little poetry magazine based in Bristol, who unwittingly put his foot in the minefield. I had taken a piece from a writer, who happened to be a friend, who grew up in, and suffered terribly from, the conflicts. In a sense you might say that she grew up on the Derry-Londonderry hyphen itself, since her father and mother came from the two different sides and she has been trying to reconcile them in herself ever since. Of course, things have been getting better in that ravaged terrain, and while the tensions remain they are mostly allowed to rumble quietly under the surface, while expressions of hope and good will tentatively flourish like weeds on a bomb site.

We in the Disunited Kingdom think we know something about the conflicts in Ireland; but we are of course at a few removes from their reality, from any knowledge of how a misplaced word or even a tiny piece of punctuation might blow up in your face. There was a kind of Hardy-esque backstory to the mistake, too, as I’d urged my author to proof-read the piece but she had been having computer problems and told me to go ahead since she trusted my editing.

And suddenly it came home to me, in this small but vast mistake, what tensions the people of that place are still living in, what eggshells they tread; how a small mark on a page can suddenly conjure pain, trauma, division, distress.

There followed some altercations in which the misunderstandings deepened, I initially not understanding what all the fuss was about and mistakenly defending myself. To my shame, it took a day or so for me to really get it. The mistake was compounded apparently, by my stating, in her biographical note at the back, that the author came from “northern Ireland”. No, she would like it to be known that she came from “Ireland (north)”, a distinction that seemed to me even more obscure. The issues all having gone out I could only try to rectify matters by posting an apology on the magazine’s facebook page, which I did. But the damage between us, at least, was done and for a long while there did not seem an easy way back, though after a year or so we did meet again, and thankfully laid that particular ghost to rest.

I had stirred up a reaction all the fiercer for my failure to understand it, a kind of buzzing wasp’s nest of subliminal traumas going back a lifetime. And if I can get into such deep waters through a naïve mis-step, is it too far-fetched to imagine that the slow mending of divisions in those parts might all too easily collapse in cack-handed Brexit proceedings and the vexed question of the border. The “soft” boundary line has almost started to heal into a connecting hyphen. God help us if it opens again into the chasm of a dash. 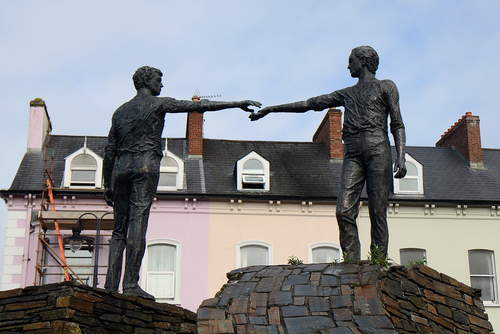 Hands across the divide. The sculpture in Derry-Londonderry symbolises the spirit of reconciliation and hope for the future. Nevertheless, reality in Northern Ireland still demands the greatest sensitivity.<br>Photo: Attila Jandi / Shutterstock.com