Can opponents of vaccination invoke Rudolf Steiner and anthroposophy?

The answer would appear to be “no”. A look at his work and biography reveals a nuanced yet pragmatic approach.

DORNACH (NNA) – Anthroposophists are currently present in the media as potential deniers of the coronavirus pandemic and anti-vaxxers. But to what extent can opponents of vaccination actually invoke Rudolf Steiner?

In this question too – as with many other topics – nuances in Steiner’s work come to the fore, opening up a number of different possibilities.

On the one hand, Steiner had reservations about the mass use of vaccination, especially as compulsory vaccination, but on the other hand he also advocated that anthroposophy should recognise medical progress.

Anthroposophical medicine, as Steiner developed it together with the doctor Ita Wegmann, therefore always sees itself as an “extended” system of medicine which builds on the findings of conventional medicine: “It is not a matter of opposing medicine working with the recognised scientific methods of the present day. We fully recognise the principles of the latter,” it says, for example, in the introduction to the book Extending Practical Medicine written by Steiner and Wegmann in 1925.

Steiner thus also thought and acted accordingly in concrete situations where vaccination was involved. This is shown by his statements to doctors in 1924 on the subject as well as his behaviour during the smallpox epidemic in Berlin in 1917 during the First World War, reported by the stenographer Hedda Hummel.

In 1924 Steiner was asked by practising doctors what anthroposophy had to say about vaccination. Steiner told them how, during his time as a tutor with the Specht family in Vienna, he exposed himself to the risk of contracting hemorrhagic smallpox, which had afflicted the mother of his pupils. He had relied on being resilient enough to defy infection: one could minimise the risk of infection through fearlessness, he argued to the doctors. In other words, a positive mental attitude strengthened the immune system in his view – as indeed resilience theory advocates today.

However, Steiner also pointed out to the doctors that in areas where the population is definitely afraid of infection, “educational measures” in this direction were pointless. “You just have to vaccinate there. There is nothing else you can do,” Steiner emphasised. For “fanatically opposing these things is what I would not recommend at all, not for medical but for general anthroposophical reasons,” he added. It was “completely absurd” to proceed with such fanaticism in specific instances.

During the First World War, Steiner was confronted with the smallpox epidemic in Berlin – also in his immediate environment. As Marie Steiner reports, Steiner had made the large art room of his flat in Motzstrasse and its adjoining rooms available for a children’s nursery, and he himself lived in rooms in the back of the house during his stays in Berlin. At that time, Steiner commuted between Dornach and Berlin.

With the outbreak of smallpox in Berlin, the question now arose of how to protect children and residents. Schools and kindergartens in Berlin were already vaccinating at that time. Hedda Hummel reports on this: “Dr. Steiner ordered that the children in our nursery be vaccinated as well, and also the people who went in and out of the nursery.”

Steiner himself and his wife had also had themselves vaccinated, the stenographer continues. Steiner had suffered from the side effects of the vaccination – just like all the other vaccinated people, mostly women. They often rubbed their aching arms, which had been affected by the smallpox vaccination, which Steiner also did. Thus a joke had circulated in Motzstrasse that Dr Steiner was “joining in the women’s movement”.

Against the background of these reports, we can ask ourselves where Steiner’s place would be today, at the time of the coronavirus pandemic. Certainly not with the anti-vaxxers and coronavirus deniers, for as stated above, he spoke out against a “fanatical approach”. He would look at the new vaccination technologies – mRNA and vector-based – with great interest, as they serve medical progress, but he would reject compulsory vaccination.

And as to whether he would have himself vaccinated or trust in his own resilience to COVID-19? Here, too, one can draw one’s conclusions with a look at Steiner’s biography: as a young tutor in Vienna in the 1880s, Steiner – then still under 30 years old – relied on his own resilience. In wartime Berlin, in his mid-50s, he preferred to rely on the smallpox vaccination, which also protected the children in the Waldorf nursery.

Thus in the current controversy about vaccination and corona measures it is basically only the pragmatists who can invoke Rudolf Steiner. 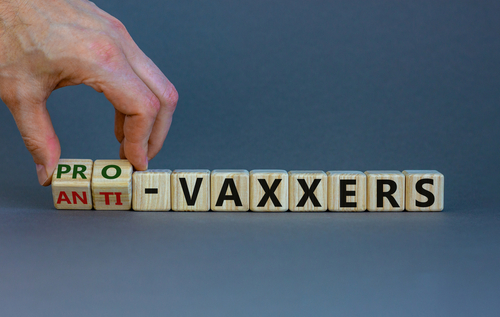