Charitable status of not-for-profits under threat in Germany

The German federal finance court has deprived the campaigning organisation Attac of its charitable status. The ruling, which could affect the tax status of other NGOs, has been widely criticised.

FRANKFURT/BERLIN (NNA) – Civil society campaigners in Germany are up in arms about a ruling of the federal finance court which has deprived the not-for-profit organisation Attac of its charitable status.

The Attac network was originally founded in France to oppose neoliberal globalisation and develop social, ecological, and democratic alternatives to guarantee fundamental rights for all, as it says on its website. It is meanwhile active in about 40 countries.

In a lengthy process, the court referred the case back to a lower court with a ruling which amounted to a direction that seeking to influence the political opinion-forming process and public opinion did not meet the condition of a charitable purpose. Organisations dealing with topical political subjects could not claim to be charitable.

Attac had been engaged for the last five years in fighting the proceedings about its charitable status, Dirk Friedrichs from Attac in Germany wrote in the March issue of the journal Sozialimpulse. Under the motto “Let’s keep going – now more than ever”, Attac was therefore calling on the engaged public to help cover the costs.

“The outcome of this process is important not just for Attac,” Friedrichs added. The law on the tax status of not-for-profits should not be allowed “to be turned into an instrument to keep down civil society organisations which altruistically work for a just society.” Attac would do everything to ensure that “political leeway was retained for civil society, if necessary by a change in the law.”

The organisation intends to carry on fighting for its charitable status, going as far as the federal constitutional court if that is what it takes.

Denying charitable status to NGOs also has funding implications since any donations can no longer be offset against tax. There are many civil society associations and foundations which see the current legal situation as a threat since it could lead to a collapse in their fundraising. About 80 such organisations have therefore formed an alliance to promote “security in law for political opinion-forming” and modernise the law on the tax status of not-for-profit organisations. Its motto is “Civil society is for the common weal”.

The ruling of the federal finance court has also come in for severe criticism among the public and in the media. A commentary in the newspaper Sueddeutsche Zeitung for example described it as “predemocratic” if the finance court was of the opinion that promoting political discussion did not serve the common good but allotment holders and dog training associations were granted charitable status.

There was now a worry that other organisations such as Friends of the Earth Germany, the refugee organisation Pro Asyl or Greenpeace would lose their charitable status. The commentary encouraged Attac to take the case to the federal constitutional court.

For the same reason the campaigning platform Campact has already been the target of politicians. Since it mainly dealt with topical political issues, its charitable status should also be called into question, the Christian Democrat member of the Bundestag, the lower house of parliament, proposed as long ago as 2016 in an article in the newspaper Frankfurter Allgemeine Zeitung. The pursuit of political objectives was incompatible with charitable status as set out in the German tax code, he argued. 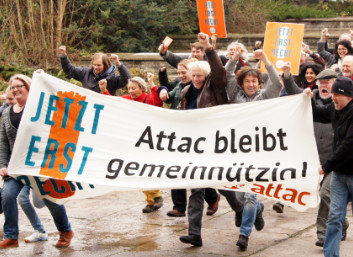