Interview with Wolfgang Tomaschitz on the contemporary relevance of the philosopher and meditation teacher Georg Kühlewind (see report above “Changing yourself and the world through training mindfulness”).

The Stuttgart conference on the work of the Hungarian philosopher, writer, lecturer and meditation teacher Georg Kühlewind was the third event of this kind after similar events in Budapest and Vienna. NNA spoke with Wolfgang Tomaschitz, the general secretary of the Anthroposophical Society in Austria and one of the initiators of the conference, about the importance of this impulse in the present time.

STUTTGART/VIENNA (NNA) – NNA: What precisely gives the Kühlewind’s thinking its topical importance, what led to the organisation of this conference after Kühlewind’s death?

Tomaschitz: On the one hand, there was the large network of followers which Kühlewind left behind – it extends, after all, from New York via Germany, Switzerland and Austria to Hungary. We quickly noticed that this international network needs to be looked after and that there have to be opportunities for these followers of Kühlewind to meet and exchange views. Furthermore, the impulse which Kühlewind gave with his thinking and meditation teaching is extremely topical – both within and without the anthroposophical movement.

After all, Kühlewind was a pioneer within the anthroposophical movement, his meditation teaching comrpises exercises which have been tested in the immediate presence of a group. He developed a sober style of exercise which was very different from the normal style in anthroposophical circles where everyone was forever just paraphrasing Steiner’s works. In the last ten years or so, anthroposophical meditation has now generally become a topic at conferences including with exercise groups and things have changed considerably – Kühlewind fits very well into this trend.

He is also a very interesting interpreter of Rudolf Steiner’s works with his meditations on perception and on the thinking. We might say that he has focused our view of certain points in Steiner’s works.

NNA: And what is the situation outside the anthroposphical movement?

Tomaschitz: Kühlewind can also be integrated very well into the mental landscape of the present, after all, everyone is now speaking about mindfulness, there is an established way of practising it.

The twenty-first century clearly needs mental techniques and anyone who does not have them at their disposal might in the end be seen as being kind of mentally illiterate. Anthroposophical meditation has a lot to say in that respect.

NNA: But does meditation, like yoga, not currently tend to be located in the medical field and is thus seen rather as a wellness thing?

Tomaschitz: That is correct, here it is above all a matter of making ourselves calm or replenishing our strength in everyday life. Kühlewind’s approach, in contrast, tends to be cognitive – he had, after all, a scientific background. This cognitive element, which frames our understanding and in that respect transforms our inner landscape, does not yet play such a big role in the discussion about meditation.

NNA: One of the results of the Stuttgart conference was that this is precisely the great advantage of Kühlewind, that he is guided by the paradigms of natural science.

Tomaschitz: And it was precisely this compatibility of Kühlewind’s thinking that spoke to me so directly when I learnt about him as a young man, that is in the 1980s. On the one hand there was none of this sanctity, this mysticism which tended to drive me away. The exercise groups were non-hierarchical and you could take part without any assumptions. Furthermore, you could keep your intellectuality, you did not have to give up your ordinary thinking, you could be a pupil of Kühlewind and a scientist at the same time.

NNA: But this sober, intellectual practice with Kühlewind might also be something that prevents it from spreading, the wellness factor is not so great.

Tomaschitz: But that is presumably a good obstacle, after all, the subject of meditation requires a very serious approach. It cannot be done without effort. Our everyday consciousness is a rather precarious affair, many things distract and drive us. Through practice we obtain strength of a different kind, there is greater self-assurance, a conscious feeling, and we learn to sort our feelings.

We have to get used to such autonomous mindfulness, such a movement of the thinking. We have to befriend ourselves with it but the instance of the I which arises at the end is indeed more stable than our everyday self.

NNA: The current time of crisis shows particularly how important such stability is in view of the increasing complexity of modern life. The conference also addressed another aspect. The speakers Salvatore Lavecchia and Rudi Ballreich extended Kühlewind’s approach in still another direction of community building. Does that mean that the person practising in line with Kühlewind’s teachings about meditation also becomes more capable of community through such practice, i.e. their social competence improves?

Tomaschitz: There are certainly no recipes in this respect. But it was indeed a great turn in Kühlewind’s work to include the dialogue-based teaching about the logos at a very early stage. The logos teaching introduces a human level to his work. The spoken word, the turn towards the other, were included from the beginning – to this extent the exercises have a strong social effect. It is indeed the case that the exercises as developed by Kühlewind lead to us becoming socially more compatible. And there are many paths of spiritual practice of which that cannot be said.

It should still be added, perhaps, that Kühlewind always considered it important to restrict the way the exercising is practised to manageable, modest content – manageable but open upwards towards more complex content. He always took care not to overload the practice, which often happens. With Kühlewind fundamental, simple facts are always used for practice.

NNA: So what next with Kühlewind’s legacy, will you organise these conferences regularly now?

Tomaschitz: We hope that next time we will be able to meet without the restrictions brought about by the coronavirus. This time it was primarily participants from Germany who were there in Stuttgart, but there are many followers of Kühlewind abroad who would also have liked to come. An interesting thing in this connection is the conference which is planned to take place in Dornach from 22–25 April. It will be about an exchange of experiences between the different approaches of anthroposophical meditation. It’s called “Living Connections”.

NNA: In conclusion, one more question about a matter which you very much emphasised at the Stuttgart conference: the ability of of Kühlewind’s thinking to connect with academic research into the philosophy of mind. How can the “Kühlewind school” approach that, what is planned?

Tomaschitz: That is indeed a very specific question. There will be a research colloquium on this next year under the auspices of the Akanthus Academy in Stuttgart. To begin with, between people within anthroposophy who are involved in approaches in contemporary philosophy and in academic consciousness research.

NNA: Thank you very much for the interesting discussion! 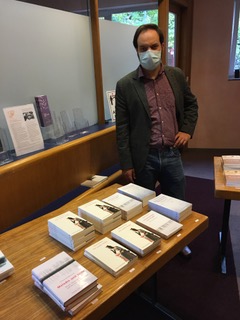 Bookseller Benjamin Wagner with a book table at the conference offering books by Kühlewind for sale.<br>Photo: Cornelie Unger-Leistner