The first Sensory Experience Field has opened in China. It aims to encourage people to reconnect with the world through new gateways to the senses and to close the increasing divide between people and their sensory environment.

The first Sensory Experience Field in Asia has just opened in China. It is a concept inspired by the German polymath Hugo Kükelhaus to encourage people caught up in the serial uniformity of our products and increasingly virtual reality to reconnect with and explore the world through the individual immediacy and authenticity of their senses. Anne Hu went to the opening for NNA.

CHANGSHA (NNA) – 24 March 2017 is another drizzling, cloudy day in Changsha, capital of Hunan Province, China. Despite the gloomy weather, many people have gone to the outskirts of the city for the opening event of the first Sensory Experience Field in China and, indeed, the whole of Asia.

Walter Siegfried Hahn, the creative director, and Changchun Hu, the executive director greet their guests in the grand hall of the Athens Academy in Broad Town, the headquarters of the well-known Broad Group.

The ceremony itself unfolds as an experience field all of its own: it starts with a circle dance and is then followed by thoughtful addresses, the folding of a five-fold star with our own hands to obtain an understanding of the infinity of the human being, soundscapes by Jochen Fassbender to send a shiver down your spine, and finally the unveiling of the “Gingko Plate” – the German and the Chinese version of Goethe´s poem about the Gingko biloba which so beautifully touches the topics of East and West, Yin and Yang, One and Two.

Nowadays there are many Sensory Experience Fields, mostly in central Europe, yet it is still rather an unfamiliar concept to the Chinese. News has however already spread in town that there is something…, well, something you have to see. See with your own eyes. Witness with your own feet.

And while from afar those giant metal tubes (listening tubes made from factory waste material) still seemed somewhat wondrous, while the over-sized chair (the “biographical chair”, making adults look like small children) looked sort of funny, the “long march“ through the gigantic maze gave the visitors a taste of the not only sensory but also humorous approach to the things that were chosen in the creation of this place.

Learning through the body

According to his Wikipedia entry, Kükelhaus gained international recognition through his Experience Field for the development of the senses presented at the 1967 World Expo in Montreal in the form of 30 different experience exhibits. At the centre of these exhibits stood experiencing the world with the senses and an awareness for the body, as opposed to a purely intellectual engagement with the world. These experiential exhibits were “manifestations of his phenomenology of consciousness regarding the learning process as a psycho-physiological experience: learning through the body.”

The making of an Experience Field in one year shows amazing speed – this is China after all. Exactly one year ago, coincidentally on Hugo’s 116th birthday, Changchun and Geng Rui, the co-founders of the Chinese sponsoring institution Juehuo (the Chinese characters for the name can have two meanings: to feel life or to live an awakened life), found Walter. Juehuo’s wish of making an Experience Field clicked immediately with him.

To people who haven‘t traveled the country it may be hard to imagine, but it is not only high-rises, bridges and tunnels mushrooming in the land but there are also increasing numbers of people who feel the urgent need to act in education – and take things into their own hands. Three hundred Waldorf initiatives in just ten years are just one sign of it and once the idea of the Sensory Experience Field found its way on to Chinese social media, Walter Siegfried Hahn got several requests from all over China. Walter chose Changsha for a reason.

It´s not so much that he liked to read Mao Zedong´s “red bible” in his youth (and Mao Zedong spent his young years in town). It´s not only the spicy, amazingly diverse food he likes a lot. It is the social environment, the embedding in a vibrant network of cultural and scientific initiatives which are not only connected to other lively initiatives in the 8 million-inhabitant city of Changsha but the province of Hunan, the whole of China, and in fact worldwide.

Hahn would prefer to see the thorough communication of the “method” of the Experience Fields rather than the serial construction of installations which might furnish many playgrounds or pedestrian zones throughout the country. “Look at all the amazing things we have today,” says Hahn, “but what if people don´t know how to use them properly?”

According to him our world is out of balance, as we favour matter before process, things before skills. And so, having made the local team come up with some 50 installations so far, he stresses the importance of skill-building while doing so.

Walter has come a long way from directing the largest Experience Fields in Germany (Schloss Freudenberg) and Switzerland (Sensorium). He first went West and did some work in North America (Hawaii and Michigan) and then brought his work to countries as diverse as Bangladesh, Thailand and the Philippines. Throughout this time he has also attended to projects in Europe, like training courses for co-workers of Experience Fields, adding installations or building a sensory park from scratch like now in Changsha.

Interestingly, even though the Sensory Experience Field is a western concept, Walter has incorporated various Chinese ideas and traditions into his installations here. For example, in the installations made from wood, traditional Chinese wood joints are showcased rather than assembling them just with screws. Or take the sound stones: in the West, a certain Elmar Daucher discovered the sound potential of massive stones as late as the 1970s and Hugo Kükelhaus integrated one such sound stone in his traveling exhibit.

In China, the use of gigantic stones as sound objects goes back 5000 years and they are used into the present in Buddhist temples. Although the sound stones are not widely known in today´s society, there is abundant know-how around as to how to bring out the sound from the “silent” stones and it seemed obvious to make them part of the Sensory Experience Field.

And then, of course, there is the giant Tibetan Singing Bowl: by turning a mallet covered in rubber around the rim of the bowl, it produces harmonic overtones creating a unique, calming effect described as “the sound in the beginning of the universe”. The bowl is so huge that one can sit in it, thus experiencing the waxing and waning hum with the whole body. Singing bowls are used in some Buddhist practices as the signal to begin and end periods of silent meditation.

As the last part of the opening, Changchun read the blessings from the Hugo Kükelhaus Society in Germany along with those from the Schloss Freudenberg and Sensorium Experience Fields as well as from Hugo Kükelhaus’s daughter: “All the best and good luck to the new Experience Field inspired by Hugo Kükelhaus. My wish is that it will bring joy and growth to many people. We are aware that Hugo Kükelhaus was a great admirer of Chinese culture and that many of his thoughts originated there. To begin with, the script. I remember how he taught me to grind the Chinese ink, and then how to write and draw with a homemade goose-feather pen. With heartfelt wishes, Barbara Vogel-Kükelhaus.”

Maybe now is the time when western sensory educational initiatives will be continued in the oriental world and integrated with eastern wisdom.

During Hugo’s time, he witnessed the beginning of a radical change in the relationship between the human being and the surrounding world. He pointed out the shift from individually customized products to serial production as the step away from measurement on a human scale.

From now on the machine had the say, according to him. Instead of products cut individually to size, commodities turned to lifeless, identical copies produced by machines. In the wake of this development people were drawn step by step into a more and more virtual and machine-driven world, losing on the way part of their sensory faculties and connection to nature and fellow human beings.

Until now this divide between humans and their sensory environment has deepened, but people like Hugo and those who believe in his Sensory Experience Fields are trying hard to let people rediscover their abilities of seeing the world through their own eyes and reclaim their control over life from electronic devices.

Walter once shared his dream that all people on earth could have at least one authentic experience and maybe go to an Experience Field once in their lives.

The Changsha Sensory Experience Field is the first one in China and Asia, but will not be the last. Now that the Chinese Juehuo team has become the pioneer in exploring new gateways to the senses, it also stands ready to work with Walter to continue to inspire and support similar yet individualised initiatives in other places in China.

In the non-stop rain, people are laughing and joking under red, blue and yellow umbrellas, trying to find the central, open section of a large, extended area of bushes, a veritable maze, called “The Elephant in the hat”. The joyous feeling is growing, like the plants in the beautiful drizzle of spring. 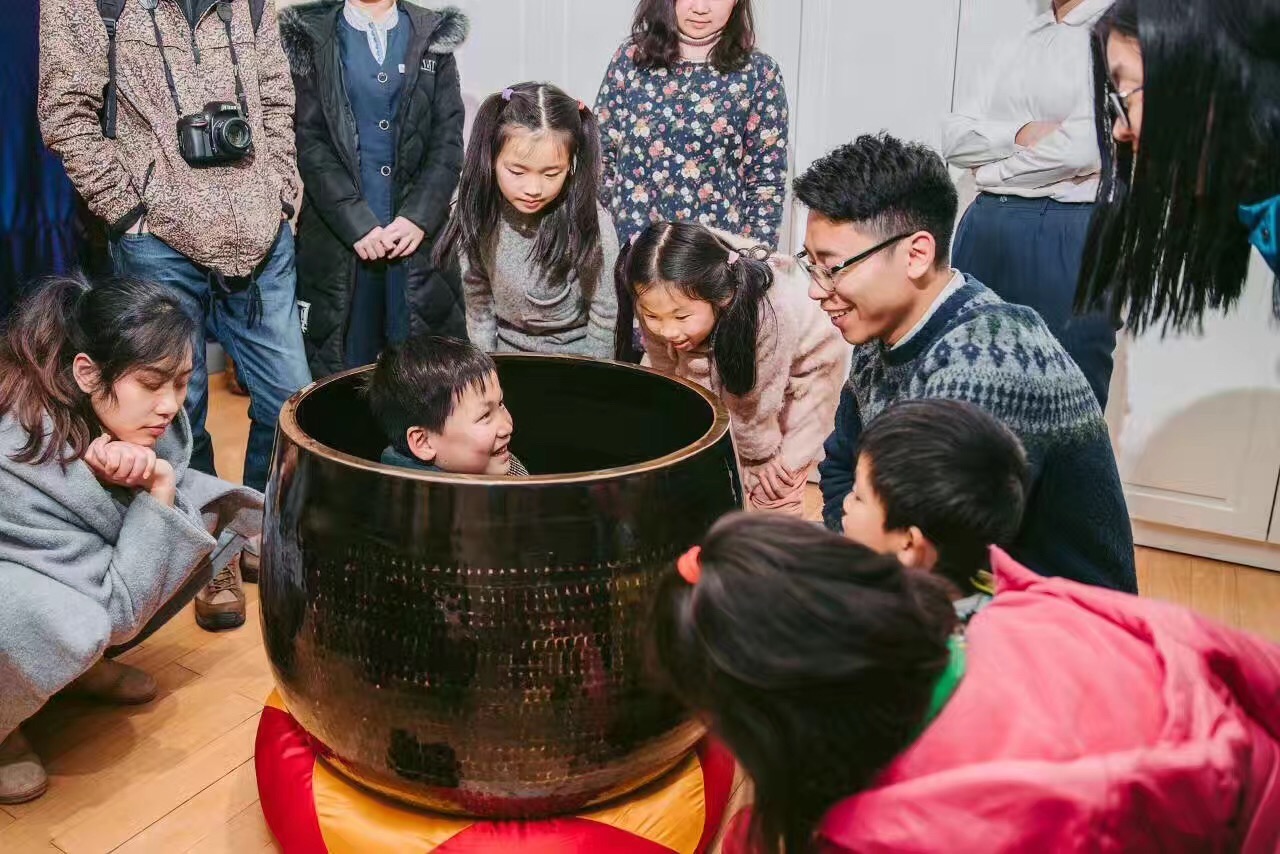 The Tibetan Singing Bowl is large enough to sit in (Photo: Xixi Photo) 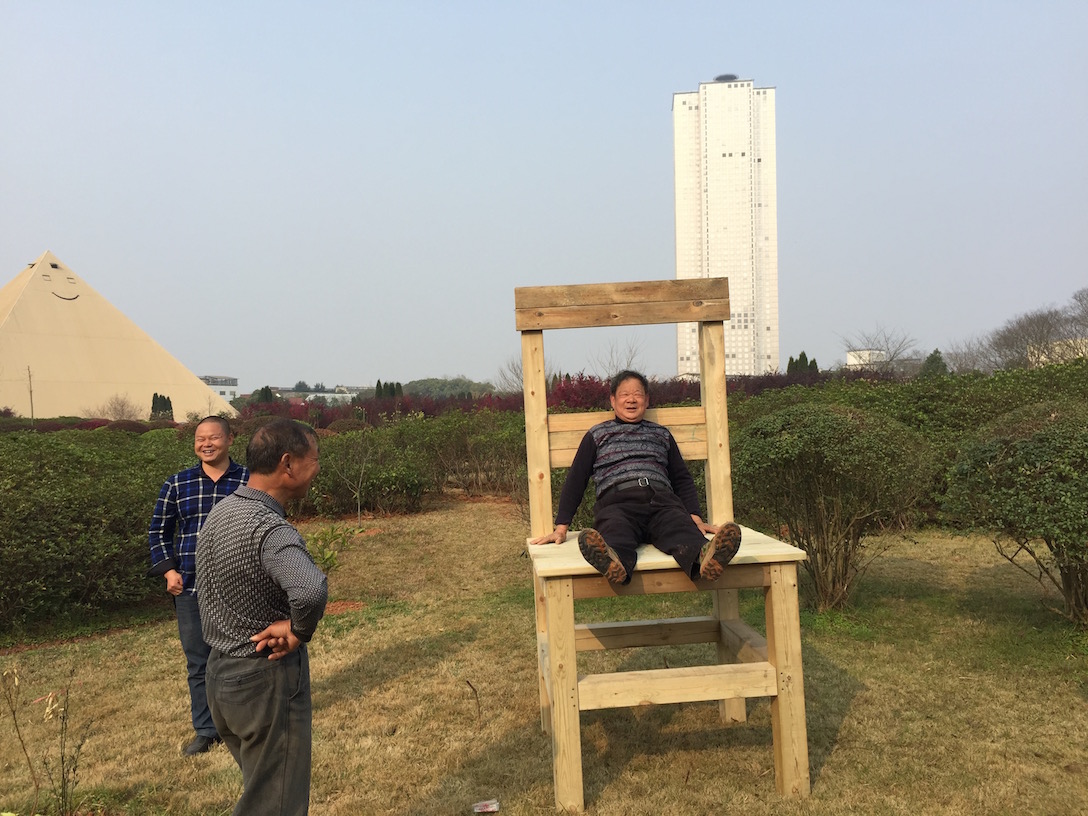 A child's-eye view of the world for adults in the biographical chair (Photo: Hahn) 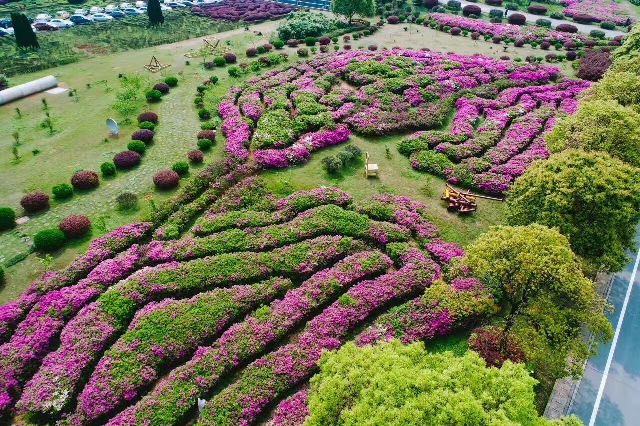 "The Elephant in the Hat" - a giant maze (Photo: Hahn) 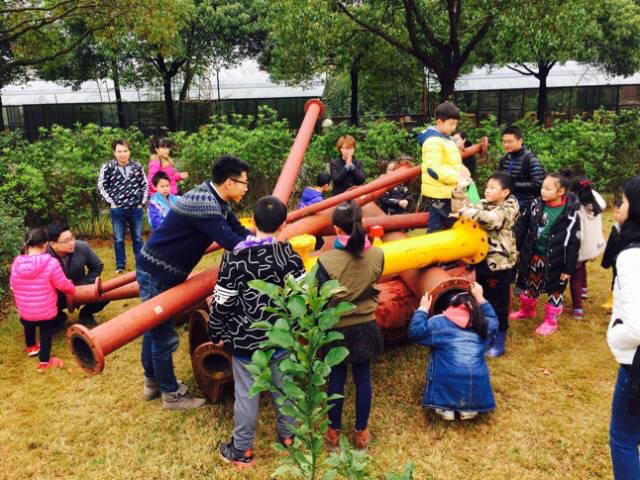 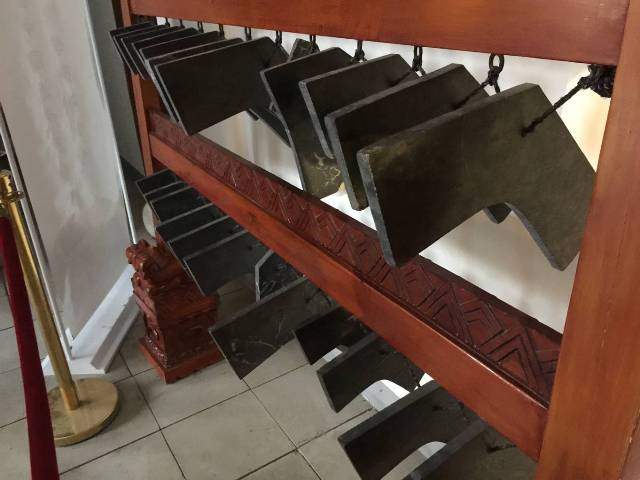 And ancient sound stones as used in a Chinese Buddhist monastery (Photo: Hahn) 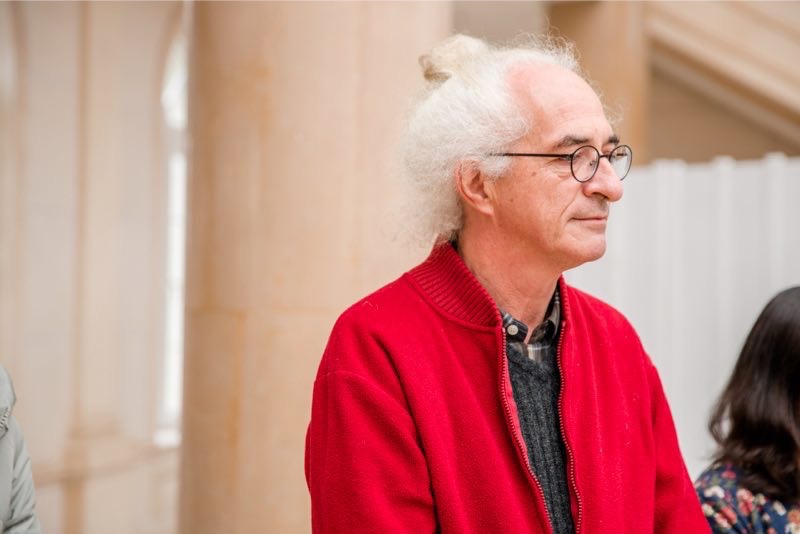 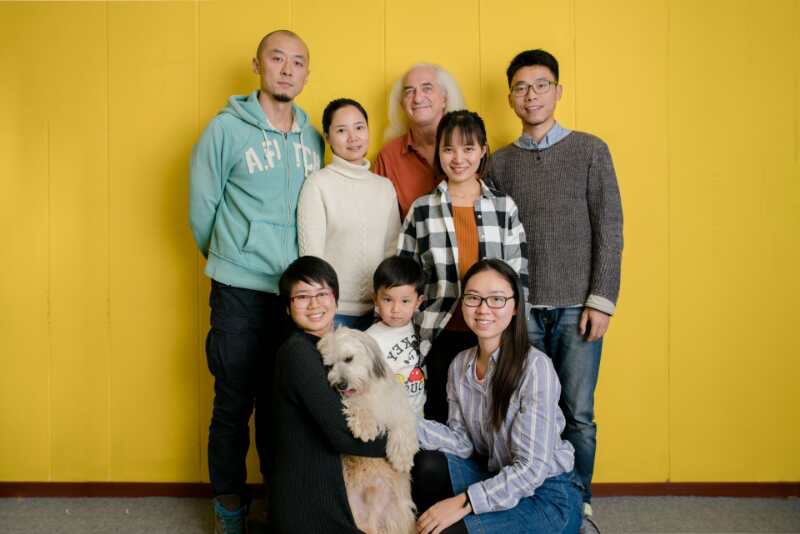 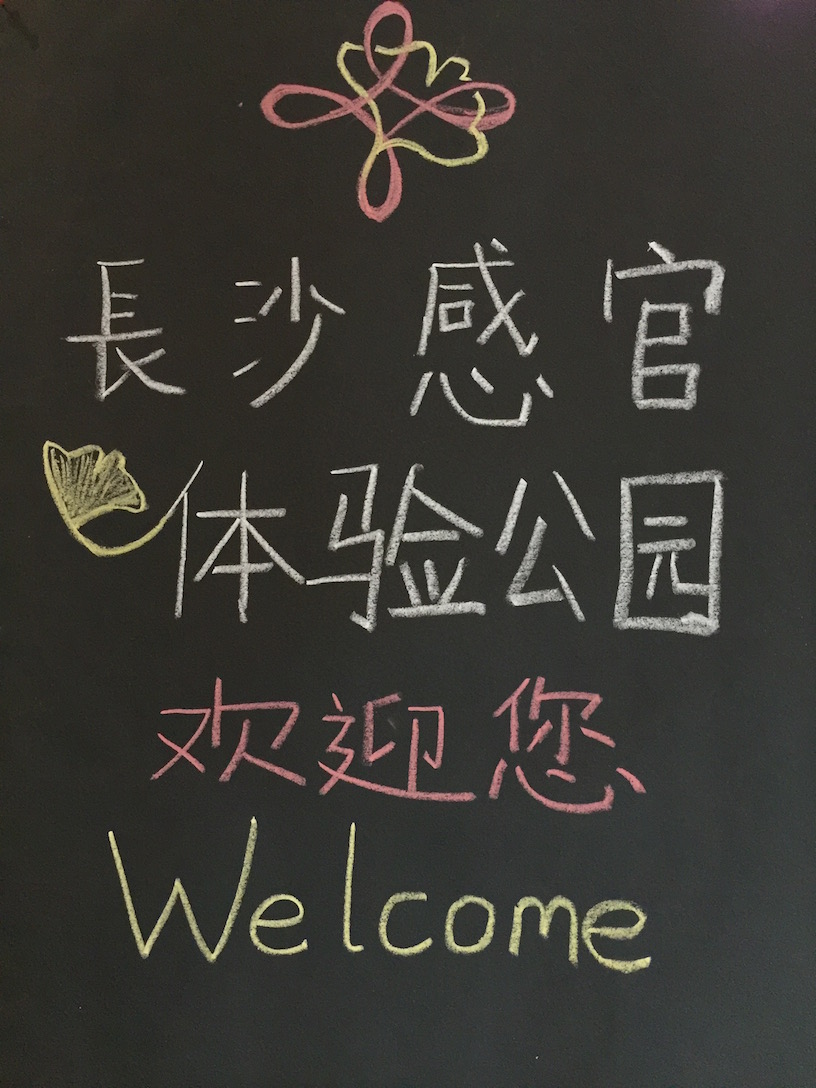 Welcoming the visitors to the Sensory Experience Field (Photo: Hahn)