A successful apiculture project on Lanzarote in the Canary Islands keeps bees in a manner that accords with their innate behaviour. This brings great benefits both for the bees and for people.

What started with six bee colonies imported from Gran Canaria in the Canary Islands has turned into a success story on the island of Lanzarote: 54 bee colonies have meanwhile been settled at twenty locations on the volcanic island by Klaus Guttenberger und his fellow beekeepers at Apicultura Lanzarote – very much to the delight of local farmers. NNA correspondent Cornelie Unger-Leistner visited the project.

PUERTO DEL CARMEN/LANZAROTE (NNA) – I meet up with Klaus Guttenberger, at the time still director of the WWF regional office in the Canaries, outside the tourist town of Puerto del Carmen at the Finca Limos Altos. He has lived on Lanzarote for thirty years.

Two bee colonies belonging to Apicultura have found a home at the edge of the Finca which is part of the anthroposophical Centro de Terapia on Lanzarote. Its founders, Lilo and Enrique Winzer, used to live there but today it provides accommodation for tourists.

The environmental activist Klaus Guttenberger has concerned himself with the subject of “bees on Lanzarote” for five years. Although there had originally been wild bees on the volcanic island, the historical records show that there was no apiculture. Today there are approximately 200 bee colonies on Lanzarote, most of them kept in a conventional way.

But Guttenberger and his colleagues are concerned that the bees should be kept in a way that accords with their innate behaviour. One of the two bee colonies at the edge of the Finca Llomos Altos lives in the model “golden hive” which is recommended for sustainable bee keeping.

To begin with, the incentive for the Apicultura project, in which Darlene Kist from the USA and the beekeeper Betty Bonanni from Argentina are also involved, was to assist organic agriculture on the island. “Apiculture increases yields and quality, for example of strawberries, tomatoes, pupmpkins, courgettes or melons. The farmers on whose land we established the bee colonies wouldn’t do without them anymore,” explains Guttenberger. Farmers always had to pollinate the pumpkins, for example, by hand on Lanzarote; this work is now being taken on by the bee colonies.

The positive function of domesticated bee colonies in comparison to wild bees arises because the wild bees fly from plant to plant whereas the domesticated bees stick to one type of plant. “They don’t fly from a pear tree to a rosemary plant but stay with the pears, say, once they have started there. That is what makes their pollination so valuable for the plants.”

Klaus Guttenberger has also studied the situation of bees more widely: “Bees occupy a special position in human animal husbandry because although they are domesticated, they nevertheless roam freely at will out in nature – that is what makes them so vulnerable.” The worldwide problem of the collapse of bee colonies was connected above all with the conditions under which bees were kept, he says. “This is basically the same as with other conventional ways of animal husbandry – the primary aim is to increase the beekeeper’s yield and the welfare of the bees only comes a poor second.”

Additionally, monocultures and use of pesticides in intensive farming have led to a dramatic deterioration in the living conditions of bees: “All the nooks and cranies with wild herbs have disappeared, every square metre is in use.” All these factors together weaken the bee colonies. There is even a term for it: colony collapse disorder (CCD).

In Lanzarote, the bees encounter better conditions because the scarcity of water on the island means that there is only extensive agriculture. “We haven’t yet made a profit, but our honey can already be bought in various organic shops on the island,” Guttenberger says. Two-hundred-and-fifty kilograms of honey have been produced so far, an average of eight kilograms per colony per year.

Apicultura is a pioneer in the field or organic honey on the island. “There is, of course, no comparison with conventional beekeeping in Europe where 30 kilograms per colony is the norm. But bee colony collapse shows that here too – as in all intensive animal husbandry – we are increasingly reaching the limit. That is why our first question at Apicultura was: what do the bees want?”

With chickens and other domestic animals it is easy to see what cage or intensive rearing means. Bees require a more complex understanding. The Apicultura activists went to Mellifera e.V. in Germany to learn about keeping bees in a manner natural to the species. This type of beekeeping was developed by beekeepers in the 1980s based on ideas from Rudolf Steiner. At the Fischermühle teaching and research apiary they started to test the new way of doing things.

The basics are considered to be the increase of bee colonies through swarming; that the bee colonies are allowed to build their honeycombs themselves; and no artificial queen breeding. These principles were also included in the beekeeping guidelines set out by biodynamic certification organisation Demeter e.V. in 1995.

These principles contrast with the practice in conventional beekeeping in which the drive to swarm is suppressed by all available means, the bees are given uniformly sized ready-made combs and queens are bred by breeders and despatched to beekeepers. Animal welfare has not really yet been properly set out for bees. German law on animal welfare, for example, only calls for them to be handled “with respect”.

The golden hive developed by Mellifera e.V. has very large frames which are designed for the bees to build their own honeycombs. There is enough room for the whole colony in a single space and the latter is not separated into different areas. The tall comb in the golden hive ensures that the bees have enough  honey for their own use. One of these bee hives, which allows the bees to express their innate behaviours, can be found at the Finca Llomos Altos.

So, does keeping the bees in this way, which is natural to them, stop them from being affected by the dangers which threaten bees all over the world? “It isn’t paradise here either, parasites affect our bees as well, but the African bee species we have here – it’s called Abjea Negra Canaria – is also more resistant.”

The differences are already apparent even just taking a cursory look at the hive at the edge of the Finca: the bees are significantly smaller than their European cousins and much darker. They also behave differently. In these bee colonies it is not just the guard bees which defend the whole hive but all the bees and they are also more vigilant and aggressive.

Klaus Guttenberger always takes care to put on full protective gear when he works at the hives and your intrepid NNA reporter in her shorts did not dare to approach too close to the hive when Klaus Guttenberger lifted the top off to explain the principles of beekeeping that take account of the innate behaviour of bees.

The debate as to whether these more resistant African bee species might possible provide a solution for bee colony collapse when crossed with European bees is not really very relevant in Guttenberger’s view: “The African bees are not suitable for keeping in densely populated areas. Furthermore, it is more important to change the conditions in which bees – and, for that matter, other animals – are kept with animal welfare in mind.”

In a wider context, Klaus Guttenberger sees the issues surrounding bees as an important subject in relation to the time we live in. “For me, such a beehive has an incredibly positive aura. It is about meaningful division of labour and living together in a group, it’s an organism from which we can observe a lot. Who tells the bees what they should do, for example? Where does the organisation of the whole bee colony have its origin?”

In this connection he was particularly impressed by Thomas D. Seeley’s book Honeybee Democracy. In this book the researcher, who has spent his whole live studying bees, decodes the language of bees, among other things, and shows how their swarm intelligence reaches joint decisions. Against this background, Klaus Guttenberger, who is about to enter retirement, is looking forward to spending a lot more time working with bees, both in practice and looking at the theory. 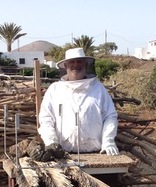 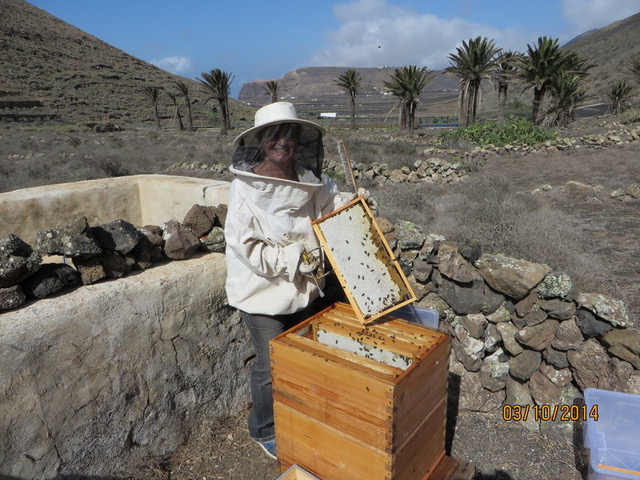 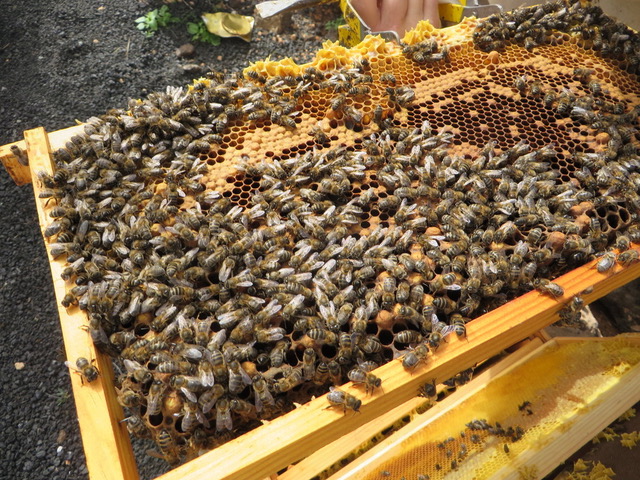 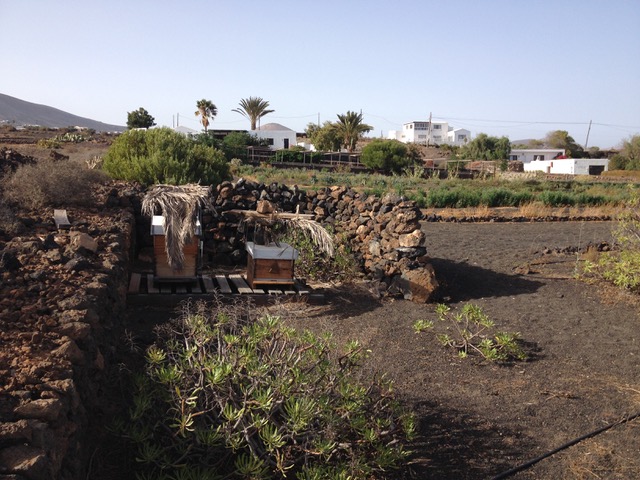 The beehives with the Finca Limos Altos in the background. Photo: Cornelie Unger Leistner