Thousands of refugees continued to drown in the Mediterranean in 2017, prompting the UNHCR to call for safe pathways. The refugee agency has also urgently asked for donations to help refugees families survive the winter.

LONDON/BONN (NNA) – The Mediterranean saw another bad year in 2017 with 3081 refugees drowning on the dangerous crossing. In total, 170,317 people risked their lives to reach Europe, the UN refugee agency UNHCR reports.

The agency has called for greater access to safe and legal pathways to Europe such as resettlement and family reunification. More than 11,000 refugees and migrants have drowned in the Mediterranean since 2015 with numbers reaching a peak last year at just over 5,000 deaths.

The UNCR has also urgently appealed for donations to support the approximately four million refugees from Syria and Iraq living in the Middle East who are currently in a critical situation with the onset of winter.

Of the total US$228 million requested to finance this year’s winter programme, donations so far received amount to US$143 million – leaving a serious shortfall. Only 63 percent have been funded.

This lack of funds had a direct impact on the scope of winter assistance, the UNHCR said. As a result it would not be possible to provide the refugees with sufficient heating stoves, kerosene and thermal blankets. The renovation and maintenance of emergecy accommodation was also at risk. Tents had insufficient insulation against the cold and camps were at risk of flooding from rain and snow.

“The consequences are devastating for thousands of refugees in the Middle East,“ the UNHCR said. Most of the Syrian refugees who fled to Lebanon were living in the coldest regions of the country – in the north, the Bekaa Valley and Mount Lebanon. Winter temperatures can fall to minus five degrees centigrade in these areas.

The situation of the refugees is no better in other Middle Eastern countries. Eighty percent of Syrian refugees in Jordan, for example, were living below the official poverty line of 81 euros a month and  most households were seriously in debt. “These families have to live in undescribable conditions,” said Peter Ruhenstroth-Bauer, chief executive of UNO-Flüchtlingshilfe, the German partner of the UNHCR.

A similar situation existed in Lebanon. There 71 percent of the 1.2 million Syrians lived under the poverty line. 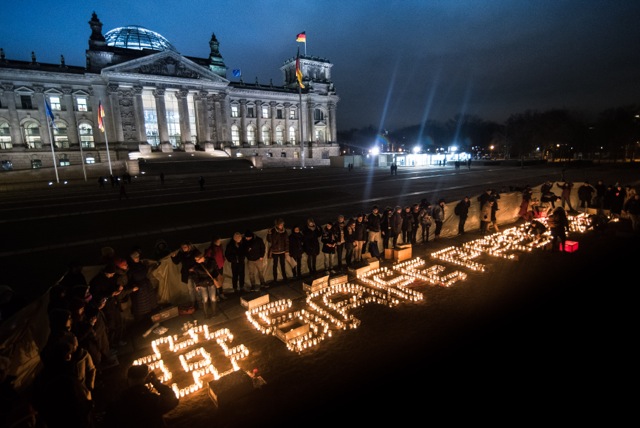 A year after the maritime rescue organisation Sea Watch highlighted the plight of refugees in the Mediterranean with its #SafePassage compaign, the situation has barely improved. According to the UN refugee agency UNHCR, over 3,000 refugees still died in 2017.<br>Foto: Ruben Neugebauer