The SEKEM initiative in Egypt has posted continued economic growth in its 2016 sustainability report. Work is ongoing on social and environmental issues. Separately, it mourned the death of founder Ibrahim Abouleish in June.

CAIRO (NNA) – Despite what it described as a difficult year, the Sekem initiative in Egypt nevertheless manged to post continued growth in 2016.

Introducing its recently published sustainability report for 2016, Sekem’s CEO, Helmy Abouleish said: “The year 2016 has been difficult for Egypt and SEKEM. Three consecutive devaluations hit the economy hard and increased prices within the local market, also due to increased import costs. SEKEM and its subsidiaries have been impacted by these devaluations as well.”

This meant that SEKEM could not achieve all its economic targets as it had done “in the former post-revolution years”.

The share of exports in 2016 also increased to 30 percent from 21 percent in 2015, achieving total consolidated export sales of EGP 87.44m (£3.82m, €4.17m, US$ 4.95m). This was the result of extending dealer networks internationally and the acquisition of new customers.

SEKEM reports that it raised its minimum basic wage to EGP 1,300 (£57, €62, US$ 74) a month, higher than the average minimum wage in Egypt in the last five years of EGP 1100, and highlights the improved ratio of the highest to the lowest annual full-time salary from 1:36 in 2015 to 1:31 in 2016. Furthermore, due to its positive operational performance, SEKEM was able to invest 10 percent of its annual profit in community development, the sustainability report adds.

Work is ongoing on gender equality. In 2016, the initiative continued to focus on the empowerment of women in a policy that was officially formulated in 2015 in SEKEM’s Gender Strategy for a Balanced Society. Several awareness-raising activities took place in all SEKEM institutions, including training with a special emphasis on gender equality for SEKEM staff.

At 22 percent, the proportion of women in the organisation remained almost the same as the previous year with a total of 295 female employees. “Due to local traditions of women staying at home after marriage we are very happy with almost 25 percent women but we are not satisfied,” the report said. Nineteen women worked in managerial posts, representing a total share of women in such positions of 14 percent – a slight improvement compared to the previous year.

SEKEM initiated a Girls’ Day in 2015 and this was repeated at SEKEM School in 2016 in cooperation with the Vocational Training Center. As gender equality is not only about empowering women but at the same time encouraging boys to take on professions that are mainly carried out by women, the report says, male SEKEM students were also engaged in the Girls’ Day activities in 2016. As a result, boys worked in internships in SEKEM’s kindergarten and the school for children with special needs.

Also in 2016, SEKEM School and Heliopolis University integrated gender equality sessions into their curriculum to help the subject become a natural part in the development of girls and boys in SEKEM as well as in Egypt.

The Centre will provide sector-specific support to the next generation of entrepreneurs in order to receive the needed capabilities, which help them to compete and grow in today’s world.

“A healthy ecology is not only the fundament of SEKEMs activities but of all life,” SEKEM says. As a consequence of that outlook it has reclaimed approximately 684 hectares of desert land since 1977 by using biodynamic agricultural methods. In 2016, this number didn’t change but the initiative could manage to keep its land fertile which in itself is a challenge in a desert country like Egypt.

In addition, all SEKEM’s 477 supplying farmers working on approximately 1,866 hectares also maintain a soil fertility-friendly crop rotation over the course of three years.

In 2015 SEKEM received the United Nations Land for Life Award in recognition of its efforts in combating desertification.

Although SEKEM has for many years maintained small scale renewable energy projects and in 2016 continued to implement several new solar projects, Egypt remains a difficult place for renewable energy due to the high energy subsidies, the report says.

The price of one litre of diesel was still too low to allow for investments into renewable energy sources, such as photovoltaic systems. This was also the main reason why SEKEM in its off-grid location at the desert farms nearby Wahat El Bahreya, Sinai and Minya still relied heavily on diesel generators for power generation for irrigation, the initiative explains.

But having already two solar power systems at the Wahat El Bahareya Farm, SEKEM’s management “is confident that photovoltaic solar pumping is the solution for the future and the remaining challenge for going ‘green’ is adequate financing”.

Another vital element is water. The United Nations projects that 2.7 billion people will face severe water shortages by 2025. The scarcity of natural water resources is also the main ecological problem that Egypt and its neighbours are currently facing. According to the sustainability report, only Bangladesh will suffer more badly than Egypt from a rise in sea levels due to its low Nile delta region.

While some of the SEKEM Farms use Nile water, others use groundwater, depending on their location. In 2016, SEKEM says it decreased the usage of groundwater for agricultural purposes by about 16 percent, inspecting the well water levels to only withdraw sustainable water amounts. SEKEM also reuses 100 percent of reusable water.

In a separate development, SEKEM earlier this year mourned the death of its founder and great social pioneer, Ibrahim Abouleish, who died on 15 June at the age of 80.

A member of the World Future Council and awarded the Alternative Nobel Prize in 2003 for his work, his endeavour had always been to make a contribution for the benefit of the SEKEM community, of Egypt and of the world through driving forward sustainable development, his family said in a statement. His vision and immense courage had inspired many people. 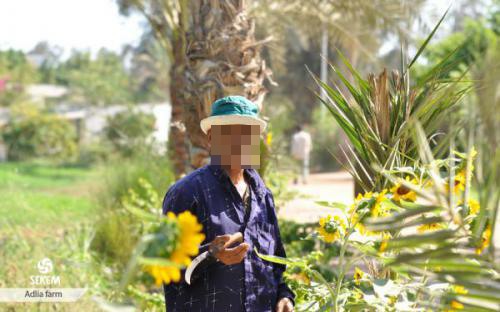 Creating an oasis of sustainability in the desert.<br>Photo: Sekem