Supporting small-scale farmers in the fight against climate change

BERLIN/COLOGNE/WUPPERTAL (NNA) – The international fair trade movement has called on the 24th Conference of the Parties to the United Nations Framework Convention on Climate Change (UNFCCC) meeting in Katowice in Poland, COP24 for short, to recognise fair trade as a prerequisite for climate justice. That included transparent supply chains, clear responsibility as well as an ecological way of working.

“Small scale farmers are on the front line in the fight against climate change. On the one hand they make a major contribution to the reduction of poverty and to global food security. At the same time they are most exposed to climate change and under particular threat from poverty and hunger. It is therefore urgently necessary for their voice to be heard to a greater extent in the COP,” Dieter Overath, managing director of TransFair, appealed to the international community.

The goal of the talks in Katowice had to be “climate justice for the weakest”. Fair trade showed that global trade was possible which valued people and the environment, the Fair Trade Forum writes in its press release. The fair trade movement has published a policy statement – “Trade Justice: A key component of building smallholder farmers’ climate resilience” – for the COP24 climate change conference.

More than 500 million small-scale farms provide over 80 percent of the food consumed in the Global South, thus contributing significantly to poverty reduction and global food security. Yet smallholder farmers are disproportionately threatened by poverty and hunger, and are among those most vulnerable to the impacts of climate change, the policy statement says.

“Small-scale farmers are increasingly suffering from failed harvests, water shortages and natural disasters. That puts food security as risk as well as the livelihood of whole communities. Adjusting to climate change thus becomes a question of life and death for many,” said Andrea Fütterer, chair of the Forum Fairer Handel und head of the policy department of GEPA - The Fair Trade Company.

Small-scale producers and marginalised groups of the population thus urgently required greater financial support from the international community, further training and expert advice in the fight against climate change. Small-scale farm producers were, furthermore, affected by extreme price fluctuations in conventional global trade, by price pressures and unjust trade practices. Fair trade showed, in contrast, that “trade for the benefit of people and the environment is possible”.

In its policy statement, the fair trade movement calls on the climate change conference to provide mechanisms for greater transparency, incentive systems and binding regulations for private actors to establish climate resilient and fair supply chains and to comply with their duty of care. In addition, mechanisms should be promoted that address the internalisation of the costs of non-fair and non-climate friendly economic activities.

Furthermore, the parties to the UNFCCC should ensure that the private sector in the Global South paid just and appropriate taxes to enable states to invest in the development of resilient models.

At the conclusion of its policy statement, the fair trade movement appealed to the participants at the COP24: “Invest in agronomical research in areas most impacted by climate change and promote smallholder-centered resilient agricultural practices.” 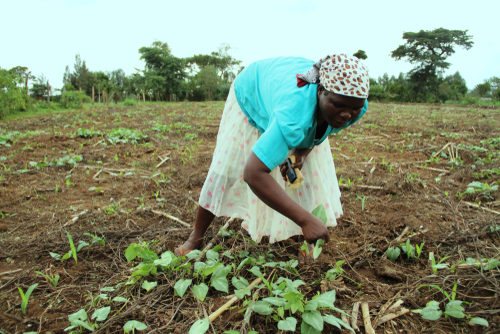 Adjusting to climate change will become a question of life and death for many small-scale farmers.<br>Foto: James Karuga / Shutterstock.com