Tirelessly at work even during the holidays

Rudolf Steiner’s sole travel diary has been published in the Archivmagazin of the Rudolf Steiner Archive. It gives an insight into the private life of the Austrian philosopher.

DORNACH (NNA) – Insights into Rudolf Steiner’s private life are provided by the Austrian philosopher’s only travel diary which has now been published for the first time in the latest issue of Archivmagazin published by the Rudolf Steiner Archive at the Goetheanum in Dornach.

The complete publication of Rudolf Steiner’s travel diary from 1901 can be considered a real highlight of the new Archivmagzin. These notes, the contents of which were previously known only to a few Steiner researchers, are contained in one of his more than 600 notebooks.

During the summer of 1901, Steiner travelled with his wife Anna from Berlin via Nuremberg to Austria, where he visited his parents and siblings. After his return, he still continued the diary for a while.

In the appendix, he kept an account book in which he noted the daily expenses. The fact that he still smoked at that time is evidenced by the regular expenditure on cigars. The stopovers with their visits to museums and churches are recorded in detail. Steiner met up with his friend Moritz Zitter and visited the Specht family at Attersee, where he had been a tutor for years.

It is characteristic of Steiner that he worked incessantly even during holidays: on this trip he was accompanied by the proofs of his book Die Mystik and the draft of the memorial book for his deceased friend Jacobowski.

It is also worth mentioning that on this journey was the first time he read Annie Besant’s book Esoteric Christianity in September 1901, a few weeks before he began his own series of lectures on “Christianity as a Mystical Fact” in the Theosophical Library. Robin Schmidt has interpreted this as stimulating his thinking in this respect (Robin Schmidt: Rudolf Steiner und die Anfänge der Theosophie. Dornach 2010, p. 136), although it should be noted that the German translation of Besant’s book did not appear until 1903 and Steiner’s knowledge of English was relatively poor.

Steiner was a guest speaker at the Theosophical Library at the time and had already met his subsequent collaborator and second wife Marie von Sivers, but was far from joining the Theosophists as a member. He his meagre income only came from lecturing at the workers’ education school and as a freelance lecturer and writer. The diary provides revealing details that are illuminating especially about the transitional period before he turned to Theosophy.

The facsimile and transcribed text of the diary is provided with annotations. The editors are Claudine Müller and Melina Schellenberg, both studying German.

In his autobiography, Steiner himself said that he did not want to reveal anything about his private life to the public, as it was none of their business.

The cover of the magazine shows a somewhat blurred snapshot from 1900: Rudolf Steiner is standing next to Anna and her daughter Minni. He appears to be holding a cigar in his left hand.

In an essay in Archivmagazin, Archive director and Nietzsche specialist David Marc Hoffmann sheds light on Steiner’s only encounter with the mentally ill philosopher in 1896, which he recorded in a notebook. In comparison with his later, more distanced statements about Nietzsche, this record gives rise to chronological but also interpretational problems.

Martina Maria Sam presents “Rudolf Steiner as a Reader”, encapsulating her many years of research on Steiner’s private library which she had presented in 2019 in the form of an extensive catalogue. His reading habits are described and evidence of reading (also in illustrations) is presented.

The former director of the Archive at the Goetheanum, Uwe Werner, examines “the organisational development of anthroposophy in the context of the impulse for freedom and the social life”. This also addresses the question of the extent to which democratic voting is legitimate within a society guided by spiritual science. 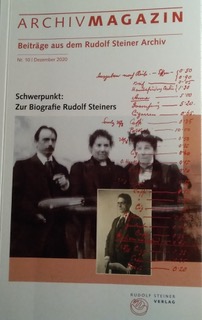